Something must be a big deal if it has a 55 day preparation.
I mean – we even had a pre-lent week, to prepare before the preparation for the Glorious Resurrection.

Christ is risen! Truly, He is risen!

The resurrection is our life, brothers and sisters. For lack of better terms, we are lifeless without it. Read what St. Paul mentions:

And if Christ is not risen, your faith is futile; you are still in your sins! Then also those who have fallen asleep in Christ have perished. If in this life only we have hope in Christ, we are of all men the most pitiable. (‭I Corinthians‬ ‭15‬:‭17-19‬ NKJV)

My faith is futile? Pointless? Useless?
Fruitless.
What could be worse than fruitless faith? Futile fruitless faith.
St. Paul confirms for you and I that the “third day” defines our new life. Having experienced death and life with Him, I am now responsible to produce fruit. For Paul, his fruit was his preaching.

Fruitful faith became his responsibility once he was a witness to the risen Lord.

Therefore, my beloved brethren, be steadfast, immovable, always abounding in the work of the Lord, knowing that your labor is not in vain in the Lord. (‭I Corinthians‬ ‭15‬:‭58‬ NKJV)

The resurrection is a must-have, an essential, a vital part of our faith. 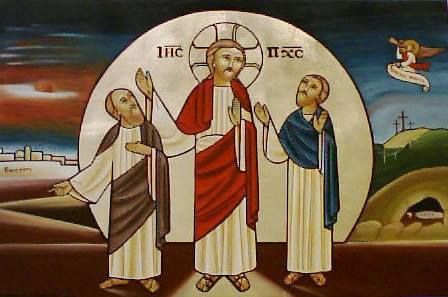 If you haven’t seen this icon before, turn with me to Luke 24:13

Now behold, two of them were traveling that same day to a village called Emmaus, which was seven miles from Jerusalem. And they talked together of all these things which had happened. So it was, while they conversed and reasoned, that Jesus Himself drew near and went with them. But their eyes were restrained, so that they did not know Him. Luke 24:13-16

Where were they headed? I walked with the Lord, saw His acts, and then after the Cross, after difficulty, I give up? They were ready to give up on Jesus, and could not accept the potential of the Resurrection.
How fickle my mind and heart can be. See, the Jews came to Jerusalem as part of their passover law. Did I go through the motions of church these past few weeks as part of my law? Or was there Fruit that I was seeking?

As two of the disciples walked to a village called Emmaus, they talked about Christ, regarding him as no longer living but mourning him as dead. As they conversed, Jesus drew near and went with them, without being recognized by them, for their eyes were restrained, so that they should not know him.
-Cyril of Alexandria

The FIRSTFRUIT of those who have fallen asleep. These two were stuck in the past. Are you stuck in the past? Am I going back to my addictions after these salvific events? Leaving Jerusalem is leaving the relationship with the Trinity: always a bad idea. Not to mention that 7 mile walk…that’s no joke!

So they said to Him, “The things concerning Jesus of Nazareth, who was a Prophet mighty in deed and word before God and all the people, and how the chief priests and our rulers delivered Him to be condemned to death, and crucified Him. But we were hoping that it was He who was going to redeem Israel. Indeed, besides all this, today is the third day since these things happened. Yes, and certain women of our company, who arrived at the tomb early, astonished us. When they did not find His body, they came saying that they had also seen a vision of angels who said He was alive. And certain of those who were with us went to the tomb and found it just as the women had said; but Him they did not see.”
Luke 24:17-24

These two disciples, look at the icon, were walking with Jesus – who died 3 days ago, and they could not recognize Him. Lord, what have I done to block my vision of you? See how they identified Jesus? They called Him a “good guy” essentially…but never gave Him any Lordship over death. He was not their Redeemer.
The good news here is that we remember that 1thingisneeded, it is His persistence to not leave me in my blindness.

Then He said to them, “O foolish ones, and slow of heart to believe in all that the prophets have spoken! Ought not the Christ to have suffered these things and to enter into His glory?” And beginning at Moses and all the Prophets, He expounded to them in all the Scriptures the things concerning Himself.
Then they drew near to the village where they were going, and He indicated that He would have gone farther. But they constrained Him, saying, “Abide with us, for it is toward evening, and the day is far spent.” And He went in to stay with them.
Now it came to pass, as He sat at the table with them, that He took bread, blessed and broke it, and gave it to them. Then their eyes were opened and they knew Him; and He vanished from their sight. Luke 24:25-31

How were they able to see when the sun had set? Because the Sun of Righteousness enlightened their minds and hearts. How were they able to recognize Him now? It was the familiarity of the communion. I tell you guys and gals…I miss communion. If there is 1thing this COVID situation has bothered me with the most, it’s missing out on the sacrament. He is our healing.
St Augustine clarifies

And no one should doubt that his being recognized in the breaking of bread is the sacrament, which brings us together in recognizing Him.

If you finish this passage out, they turn around and walk back that very night. They couldn’t stand living with fruitless faith, so they preached to the disciples how they had met the Lord. They entered the ministry, and those two brought forth fruit.
The resurrection empowers. The resurrection inspires.
Next week we will continue this conversation.
Have a fruitful week.
#1thingisneeded